Bokeelia is the northern end of Pine Island Florida. Bokeelia has views of Charlotte Harbor, Gasparilla Island and Boca Grande. Tropical fruit farms and palm tree groves exist in abundance. The area is home to marinas, restaurants and an art gallery. Access to Cayo Costa State Park via a ferry is available Many farmers and commercial fishermen live in Bokeelia.

Pineland is an area of Bokeelia on the west side of Pine Island. A combination of homes, agriculture, historical sites along with a marina and restaurant are present here. The Calusa Indians built a complex system of canals and today; some canals can still be seen. In the early 20th century, settlers built their homes on top of some of the Calusa Indian mounds, and today some of those Calusa mounds are still present. Research facilities such as the Mote Marine Laboratory and the University of Florida’s Randell Research Center are located here. 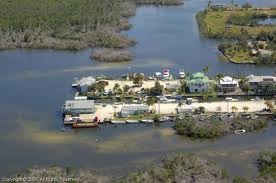 Alden Pines, Pine Island’s golf course community, is located in Bokeelia. Also present is a Calusa Land Trust trail and several parks. The local garden club has developed a garden at the Center. Wildflowers and benches make it a perfect place to have lunch.

A playground, lighted baseball fields, tennis courts and a swimming pool are present at Phillips Park, near the 4 way stop. The pool has lap lanes and a diving board. The library and museum are adjacent to the park. Matlacha has a Community Park at the center of Matlacha that offers a playground, arts building, pier and boat ramp. Parking for cars is free. Pier fishing is also free.

Bokeelia has a romantic past with pirates dashing in and out of Charlotte Harbor with their booty. As early as 1765, Spanish fishing camps were known to exist in this area, supplying Spanish settlements in the Florida Keys and Cuba. In the early 1900’s settlers began arriving in Bokeelia and made a living raising tropical fruit, drawn to the tranquility at the end of the island with Charlotte Harbor spread out before it.