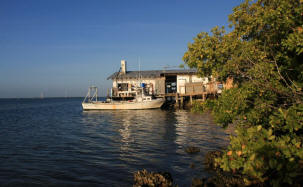 Saint James City is located in the southern portion of Pine Island Florida. As you travel south to St James City, you will see a variety of homes, as well as the VFW, American Legion and the Moose Club. Palm tree groves, fruit tree orchards and plant nurseries border the road. An off-the-road concrete bike path complete with safety rails parallels the entire distance.

As you enter St James City, you will pass the entrance to St. Jude’s Harbor, which is also the entrance to the Calusa Land Trust’s St. Jude Nature Trail.  Here you can hike or bicycle through the woods and wetlands to the waters of Matlacha Pass over ground and over wood decking.  Observe the native flora and fauna along this half-mile trail. 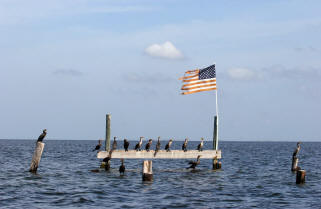 St. James City is Pine Island’s most heavily populated area.  It was incorporated before Ft. Myers.  But, showing itself in true Pine Island character, it “dis-incorporated” itself some time ago.  It too, is a mix of people, mostly a mix of retired residents, many who maintain two homes, one in St James City and one “up north”.  You’ll see modest mobile homes, luxurious single level and stilt homes, vacation cottages, and a small amount of condominiums and motels.  None of the buildings are over 38 feet tall (one of Pine Island’s few rules).  Almost everything is waterfront.  This is a boater’s community.  The water is deep and Gulf access is easy.

It is believed the Jesuit Missionaries in the 1700′s named their mission on the southern tip of Pine Island after James, their Saint. They were driven off by the fierce Caloosa inhabitants but the name remained for the area and was later abbreviated to St James City.

The hurricane of October 6, 1873 that sent storm waters over Sanibel, also hit hard in Punta Rassa, destroying the home of Captain John Smith, a Finnish sailor. Noticing that nearby Pine Island was more protected and had been spared, Captain Smith moved his family to Saint James City, becoming the first permanent settlers.

In 1885, four New England businessmen signified the arrival of developers to the area. The St. James-on-the-Gulf Co. bought extensive tracts of land and had a surveyor map a three square mile town site. Perhaps the beginning of the Pine Island real estate business. While Miami was still a mosquito infested swamp, the luxurious three story San Carlos Hotel hosted such guests as Thomas Edison, Henry Ford, William Gillette, Sam Colt and others who came to fish for Tarpon. After the death of the principals, the St. James-on-the-Gulf Co. went bankrupt. The grand San Carlos Hotel was sold and later burned down in 1905.

In 1911, a large Tampa firm bought the land holdings of the defunct St. James-on-the-Gulf Co. in order to plant sisal hemp and build a rope factory. The seemingly successful company closed it’s doors only a few years after for no apparent reason. A succession of boom-bust years followed with the fields of St James City playing host to pineapple, coconut palms, and would-be land developers.

Today, St James City is growing at a slower, more natural pace as people discover our beautiful island. Many canals with excellent access to San Carlos Bay and the Gulf of Mexico provide waterfront home sites in several residential areas.

Saint James City features various good places to eat, some offering frequent entertainment.  Pine Island is home to a many songwriters and  musicians.  They seem to congregate in Saint James City, and can frequently be heard in the local eateries and pubs.

If you are thinking of taking up residence in Saint James City, Bokeelia or Matlacha just give a call to your friendly Pine Island real estate agents at Dream Home Associates.